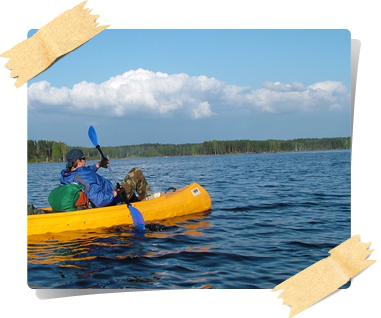 SIA „Dēkaiņi” has commenced the work in the field of active tourism. The volume of our services includes services for water tourists and bicycle tourists. We offer inventory rent and preparation of route according to client’s wishes. We work actively on development of cycle routes and water tourism routes. The mission of the company is to popularize the options offered by Latgale in the field of active tourism, to rouse interest in the potential clients to visit Latgale and to enjoy the options offered by this county. In this sphere of activity we see many options that are still unused.

SIA „Dēkaiņi” engages local inhabitants of Latgale, active water and cycle tourism enthusiasts who know very well the tourism infrastructure of the given region, nature and cultural history sightseeing objects, who have developed new and within limits summarized the existing water and cycle tourism routes. The work on development of new tourism routes, inspection thereof in nature still continues.

[spoiler]The aim of our company is by use of plenty of nature (rivers, lakes, hills, castle mounds, etc.) and cultural history (churches, estates, etc.) objects in the region and services rendered by tourism infrastructure (guest houses, campsites, hothouses, museums, catering, etc.), to offer optimally developed tourism routes for leisure activities lovers. Local tourism infrastructure services would be used within their frameworks, they would be planned so that the natural resources were used as carefully and accurately as possible and the insight as big as possible would be given into the choice of nature and cultural history objects.

The routes are developed so that they can be combined. Water tourism routes are developed for two to three days, but some routes can be continued for some more days. Cycle routes are mostly developed for one day, but they overlap so the potential client could choose how many days long trip he wants to go on. We offer the clients during one trip to go not only on water tourism or cycle tourism routes, but to combine them. It means to cover a define span of the route on boats, but further to continue it by cycles. Our company shall deliver the inventory necessary for the respective span of the route.

There are possibilities to stay overnight both in the open air-in tents, and under the roof-in campsites, guest houses and recreation centres.

For convenience the client can arrive at us by the car. The cars shall be parked in a safe parking-place depending on the chosen route. Further the tourists shall be taken with our transport to the beginning of the route and after the finish taken back.

To rouse interest to visit Latgale we offer a brief insight into its history, culture and nature.

Latgale is the most peculiar and different culture-historical county in Latvia. History of Latgale remarkably differs from the history of the other territory of Latvia. Joint history of Latgale with the rest of Latvia begun to form just from May 1917, when the congress of representatives of Latgale took place in Rēzekne where it was decided on reunification with other culture-historical counties of Latvia. Many Latvians from other counties still perceive Latgale as something exotic. Reason for that is not only the wonderful and beautiful nature of Latgale, but also the culture of Latgale that is formed by mutual influence of many nationalities and ethnic groups that live here for centuries. Latgallians, Russians, Byelorussians, Lithuanians, Hebrews and Poles living in Latgale have developed here their culture, language, architecture, art, craft, cultivated their traditions and mutual household culture. Latgale cultural heritage is represented by such architecture monuments as cathedrals, churches, public buildings, town ensembles, and also country estates, characteristic populated areas and cultural landscapes. Latgale culture traditions-language, folksongs, dances, craft form an important part of Latvian national culture.

First information on contemporary territory of Latgale are found since the times of Jersika king state in the turn of 12th and 13th centuries that in the Latin texts is called as “Latvia” (Lettia), but in ancient Russian texts as “Latgale” (Лотыгола). Unlike the rest of Latvia where the dominant confession is Lutheranism, in Latgale dominates the Roman Catholic Church. Latgale is separated from Sēlija by the river Daugava and from Vidzeme – the rivers Aiviekste and Pededze. On the East Latgale borders on Russia, on South-East on Byelorussia and on the South on Lithuania. The total are of Latgale makes 14.55 km2 that is 22,52% of whole territory of Latvia.

Indisputably nature is one of the greatest values of Latgale. Latgale is the richest in lakes region in Baltic States. In this territory there are more than 2000 lakes. In the south part of Latgale there is the Highlands of Latgale with the highest point – Lielais Liepukalns whose height is 289 m above sea level. The lowland of Austrumaltvija with the plain of Lubāns stretches into the northern part of Latgale in the middle of what there is the largest lake of Latvia – Lubāns. Around 2009 Lubāns wetland nature protected area was founded. It is a nature complex of European and world importance with an outstanding significance for preservation of many especially protected species population and biotopes. The protected area is the territory of Natura 2000 and it is created to ensure joint protection of Latvian largest inland wetland complex. Its area is 51 632 ha.

The valley of the biggest river of Latvia- Daugava – has remained untouched in Latgale. Country park “Daugavas loki” is located in the span from Naujene to Krāslava in the area of Augšdaugava protected landscapes, on both banks of the river Daugava. It was founded in 1990 and is a remarkable sightseeing object where you can see the unique Daugava old valley nature complexes and peculiar cultural heritage. Here Daugava has still kept its primitiveness, here is geologically and landscape the most manifold span of the valley with 10 huge river meanders – Daugava bows; complicated wherewith interesting conformation; natural and not destroyed scenery; rich flora. When travelling over Augšdaugava you can fully enjoy the exuberant scenery of Daugava.

One of the biggest Catholicism centres in Baltic – Aglona basilica is famous not only in Latgale and Latvia, but also in Baltic States where thousands of pilgrims gather every year, and in some way it is to be regarded as the intellectual and religious centre of Latvia. In September 1993 the Pope John Paul II visited Aglona. Unlike the rest of Latvia in Latgale many churches are well preserved and maintained due to strong religious traditions, just like many art objects, mainly icons and crucifixes. The list of Latgale cultural heritage contains more than 6000 different objects: castles, estate ensembles, churches, farmsteads, territories of towns. Almost half of them are monuments of national importance. Many old estate and park complexes have preserved in Latgale that were established as far back as in the 18th and 19th centuries. Estate ensembles with servant houses, hors stables and granaries are still to be seen. Parks, gardens and ponds with island are preserved in many places. The most part of the archaeological objects (castle mounds, cult places and ancient burial places) are located in the central part of the Highlands of Latgale and along Daugava.